Triple 7 Commodities, Inc. (“Triple 7” or the “Company”) has acquired land and mineral rights to mine and recover premium quality metallurgical coal for sale to commercial and industrial consumers both in the U.S. and internationally. The Company’s coal extraction operations are located in McDowell County, West Virginia, a region known for geologically verified coal seams and premium- grade coals used for processing in the steel making industry.

The property containing the reserves is located in southeastern McDowell County, West Virginia just south of the town of Anawalt. The majority of the property lies between the south to north runs of the South Fork of the Tug River and the main headwaters of the Tug Fork. The vicinity is bound by Black Wolf on the northwest, Anawalt on the northeast, the town of Jenkin Jones on the southeast, with the old community of Monson to the southwest. The location of the center mass of the property is Latitude: 37°18’31” and Longitude: 81°26’44”.

West Virginia is the nations second largest coal producing state with recoverable coal reserves estimated at more than 51 billion tons in 2016. There were over 280 coal companies and 456 mines producing more than 99 million tons of coal a year. McDowell County was ranked as the 6th largest surface mine producer and 13th largest underground mine producer having produced a combined 2.69 million tons in 2015. It has 84 operating mines and an estimated 1.6 billion of recoverable coal reserves. 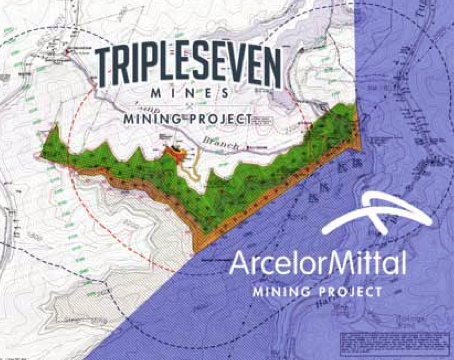 West Virginia coal is used extensively by domestic utility companies to produce electricity. Electric power utilities are the largest coal consumers in the nation, with two-thirds of all coal production being used by utilities or smaller industrial installations to generate electricity and steam. Through the installation of complex pollution control equipment, coal-fired electricity is increasingly clean, with emissions from coal-fired power plants dropping over 90% in the last 20 years. Coal-fired generation provides steady “baseload” power that is inexpensive and reliable. In 2016 the Department of Energy issued a report stating that it is vital for the U.S. to preserve its coal fleet for the sake of the stability and reliability of the electric grid.

The steel industry is the second largest coal user in the U.S. About 80 million tons of coal are used each year to make coke, an essential element in the steel-making process. About two-thirds of a ton of coal is needed to produce a ton of steel. West Virginia has some of the best metallurgical coal found anywhere in the world, and it constitutes about 40% of West Virginia’s annual production.

The West Virginia Department of Environmental Protection (WVDEP) requires a permit or permits in order to mine coal. The property currently has permits to allow the extraction of coal by surface, underground, and by highwall/auger methods. These permits cover both the Jump Branch Deep Mine & Totten Ridge Surface Mine.